(Information taking from Town of Georgina website)
Lake Simcoe is a moderately sized lake located approximately 60-km north of the City of Toronto, Lake Simcoe is a little more than an hour’s drive from half the population in Ontario.

The watershed has a total land and water surface area of 3,580 km2, of which the lake occupies about 20 percent or 722 km2.
Lake Simcoe is part of the Trent Severn Waterway connecting Lake Ontario to Georgian Bay and is southern Ontario’s largest body of water excluding the Great Lakes. The land portion of the watershed is approximately 2,858 km2 and is drained by 35 tributary rivers, with five major tributaries accounting for over 60 percent of the total area. Most of these rivers originate along the southern boundary of the watershed in the prominent physiographic feature known as the Oak Ridges Moraine. These rivers then drain in a northerly direction before discharging to Lake Simcoe.

Lake Simcoe acts as the boundary between the two travel areas of the Georgian Lakelands in the west and Getaway Country in the east. There are a number of communities bordering Lake Simcoe within the County of Simcoe, the Regional Municipality of York, and the Regional Municipality of Durham.
On the eastern shores of Lake Simcoe is Brock Township and on the south-eastern side of the lake, including the entire southern shore and eastern side of Cook’s Bay is the Town of Georgina.
The Town of Bradford-West Gwillimbury and the Town of Innisfil are located on the west side of Cooks Bay.

The deepest portions of Lake Simcoe are located in Kempenfelt Bay on the west side of the lake.

An Indian Reserve also borders the northern shores of the lake.
There are a number of islands located in the lake, the largest being Georgina Island, which also is part of an Indian Reserve.

Notice to Mariners: “Sudden Storms are frequent on Lake Simcoe and every care and seaman like precaution should be observed when navigating the lake, especially in small craft”. Consult the Website for up-to-date weather and information on storm warnings and small craft advisories.

“SPRING
There are many great areas for spring perch – from Cook’s Bay in the south all the way up to Atherly Narrows in the north. Black crappie which move to near shore sections around piers, marinas, and up connecting rivers, offer anglers additional spring panfish angling. Both species like small jigs tipped with minnows, but remember to present this bait near bottom for perch and suspend it far off bottom with a float for the crappie. Keep in mind too, that perch are often found in areas void of visible structure whereas crappies are the exact opposite. They love hanging out near docks, bridge pylons and fallen timber. Pike season opens on the 2nd Saturday in May on Simcoe and most of the shallow water weedy areas in York Regions Cooks Bay will hold these popular toothy critters. Effective techniques include trolling with Rapala crankbaits such as the Original Floater or Husky Jerk, casting spinnerbaits, twitching jerkbaits, or tossing jigs near the aquatic plants that pike call home.

Also, on the 2nd Saturday of May is when whitefish and lake trout season opens. Long lining flashy spoons or thin crankbaits next to shoals or deepwater points works great for spring lakers. Jigging spoons vertically below the boat in 60-75 feet of water for Simcoe’s world class size whitefish, has become an increasingly popular form of angling. The original Williams whitefish – so popular among winter anglers also works well for open water whities, so stop in the shop and pick up a supply before you head out. Carp anglers can fish from shore by casting and waiting for unseen carp or venture out in boats and search for huge carp as they cruise shallow clear-water flats. The Holland River, which flows through sections of York Region from Holland Landing north to the mouth of Cooks Bay, offers excellent carp fishing opportunities.

SUMMER
After the last Saturday in June, most of Simcoe’s summertime anglers target bass – especially the mighty smallmouth. “Bronzebacks”, as they are often called, frequent rocky shorelines, points, drop-offs and mid-lake shoals. Crayfish-colored crankbaits, topwaters, spinnerbaits and jigs are all proven lures for catching Simcoe’s big smallies. This lake has become a true world-class trophy smallmouth destination thanks in no small part to the fact that most anglers are voluntarily releasing those extraordinary 4-7 pound bass. These large fish then continue to reproduce and also offer other anglers the incredible thrill of catching the smallmouth of a lifetime.

Simcoe’s sometimes forgotten largemouth bass also offer exceptional angling. These bass can be found in weedier areas, pencil reeds, near docks, stumps and other structures in the lake. Plastic worms, spinnerbaits, crankbaits, topwaters and jigs produce well. Panfish such as perch, crappie, sunfish, rock bass and bullhead offer lots of fun for the young anglers. Simple live bait rigs with small minnows or earthworms are usually best. Pike continue to cruise weedlines throughout the warmwater months and can be taken with flashy spinnerbaits, crankbaits and jigs. The great thing about summertime fishing on Lake Simcoe is that you never know for sure what you’re going to catch which is just fine for the many families that visit and fish the lake occasionally or for those fortunate enough to have cottages along its banks.

AUTUMN
Interestingly enough, the season that may offer the best bass and pike fishing of the year, is also the time when you will find the least amount of anglers on the lake. This is the time of year when serious anglers fish Lake Simcoe, however, inclement weather and dealing with rough water dictates caution for all those venturing out onto the big lake. In the fall of 2003 Lake Simcoe made the headlines, when it broke its own Canadian Bass Tournament record winning weight with a 29.59 pound bag of five smallmouth bass. In 2004, the record remained, but still over 27 pounds of bass were brought to the scales by the winning team News reports declared that there is probably no other place in North America where 5 fish averaging almost 6 pounds each, could win a tournament. These types of weights exemplify the quality of smallmouth available to Lake Simcoe anglers and with the catch and release ethic strong on Simcoe, the fabulous bass fishery should be around for many years to come.

Bass are not the only fish in the fall that gather notoriety more and more every year on Simcoe … as the fabulous perch fishing is also tempting for multi-species anglers. As I write this the hot spot is straight out from the Pefferlaw River a mile or two and you can’t miss the flotilla of boats that are all there for one reason – to catch tasty jumbo perch! Other spots that are beginning to turn on include the shoreline out from Gilford and around the south shore of Georgina Island.

WINTER
More people fish Lake Simcoe during the hard water season than at any other time of year – making it the most intensively fished inland lake in the province. Ice fishing is a great winter sport that more and more families are enjoying on Lake Simcoe than ever before. Dozens of ice hut operators around the lake provide winter anglers an opportunity to catch lake trout, whitefish, perch, pike, and walleye. Many include everything you need to enjoy a great day out on the ice for one nominal rental fee. Others offer a complete package plan that includes accommodation, meals, bait and transportation to your hut…”
(“Spring, Summer, Autumn, Winter”) Wil Wegman.

Dalrymple has been a favourite destination of anglers for generations, especially those in search of the elusive musky. The main catch is bass, northern pike are plentiful and pickerel, perch and crappie round out the assortment.
In addition to the fish, Dalrymple is teeming with a stunning variety of wildlife.

For many the main attraction are the spectacular sunsets, for others it is the long finger of land that very nearly cuts the lower lake in two.
Avery Point has lake frontage on two sides; one with rocky shoreline and westerly breeze, overlooking the granite shoreline to the north, the other side with its sandy beaches is sheltered from the breeze and in the summer is a hub of cottage

The south half of the lake has mostly largemouth and pike.
The north end seems to have more structure, and is the area for walleye and smallmouth, but largemouth and pike are caught there as well.
Musky are found in the north half by Avery Point. South of the point’s south side has a shoal in 20ft of water that rises up quite shallow.
The south east shore has a good drop off, and the shore is soft bottom. This is a good area for walleye, pike and musky.
The far north shore all the way around the big point, from the North West to the North East is good for largemouth, smallmouth and walleye wherever there’s rock or riprap.

If you go in June be prepared to look long and hard for walleye. Avery Point is a good bet, as well as the “shoal” between Avery Point and the narrows.
If you fish at night your results will be much better. Also, along the east side of the lake there is a deep drop-off that goes to 30 feet from about 5 feet, back troll with a “lindy rig” with a worm or leech if you go near the middle of June.
On the east side to the narrows has produced some big walleye near dusk in the many years people have fished there. Night – use body baits like Luhr-Jensen “power dive” minnow Day – back troll with lindy rig use two feet of leader a small wire hook.

Eastern Georgian Bay is part of the southern edge of the Canadian Shield, granite bedrock exposed by the glaciers at the end of the last ice age, about 11,000 years ago. The granite rock formations and windswept eastern white pine are characteristic of the islands and much of the shoreline of the bay.
The western part of the bay, from Collingwood north, and including Manitoulin, Drummond, Cockburn and St. Joseph islands, borders the Niagara Escarpment. Because of its size and narrowness of the straits joining it with the rest of Lake Huron, which is analogous to if not as pronounced as the separation of Lake Huron and Lake Michigan,

There are tens of thousands of islands in Georgian Bay. Most of these islands are along the east side of the bay and are collectively known as the “Thirty Thousand Islands”, including the larger Parry Island.

Manitoulin Island, lying along the northern side of the bay, is the world’s largest island in a freshwater lake.

In October 2004, the Georgian Bay Littoral was declared a Biosphere Reserve by UNESCO. 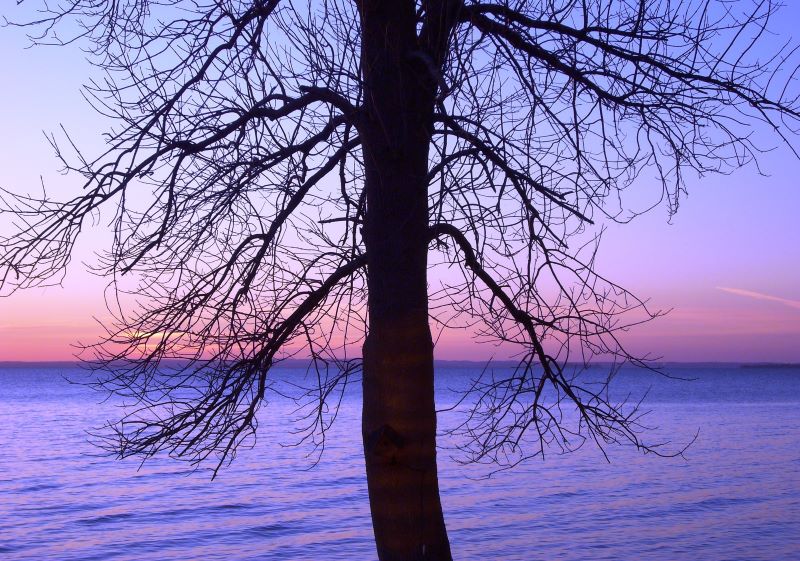 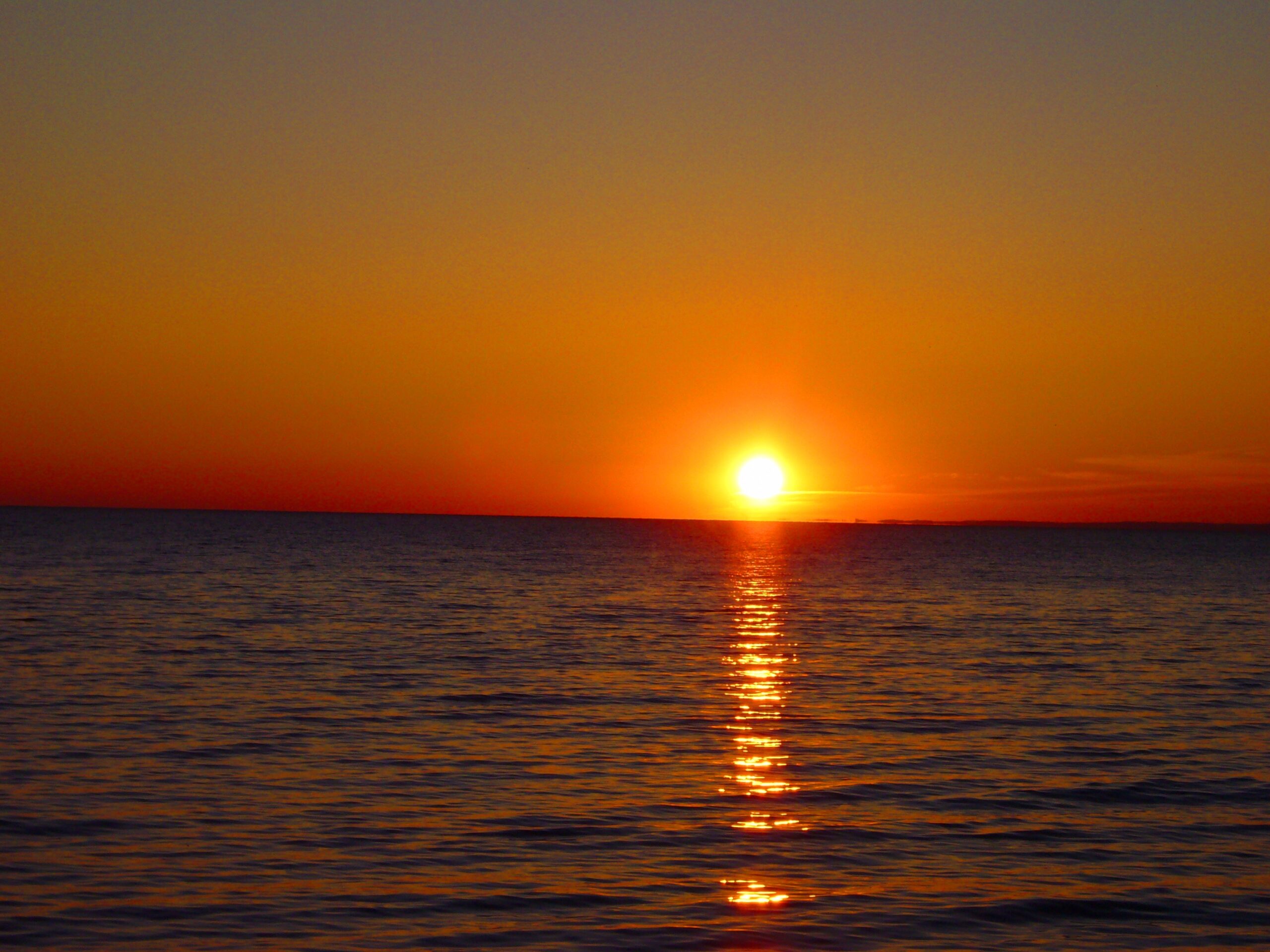 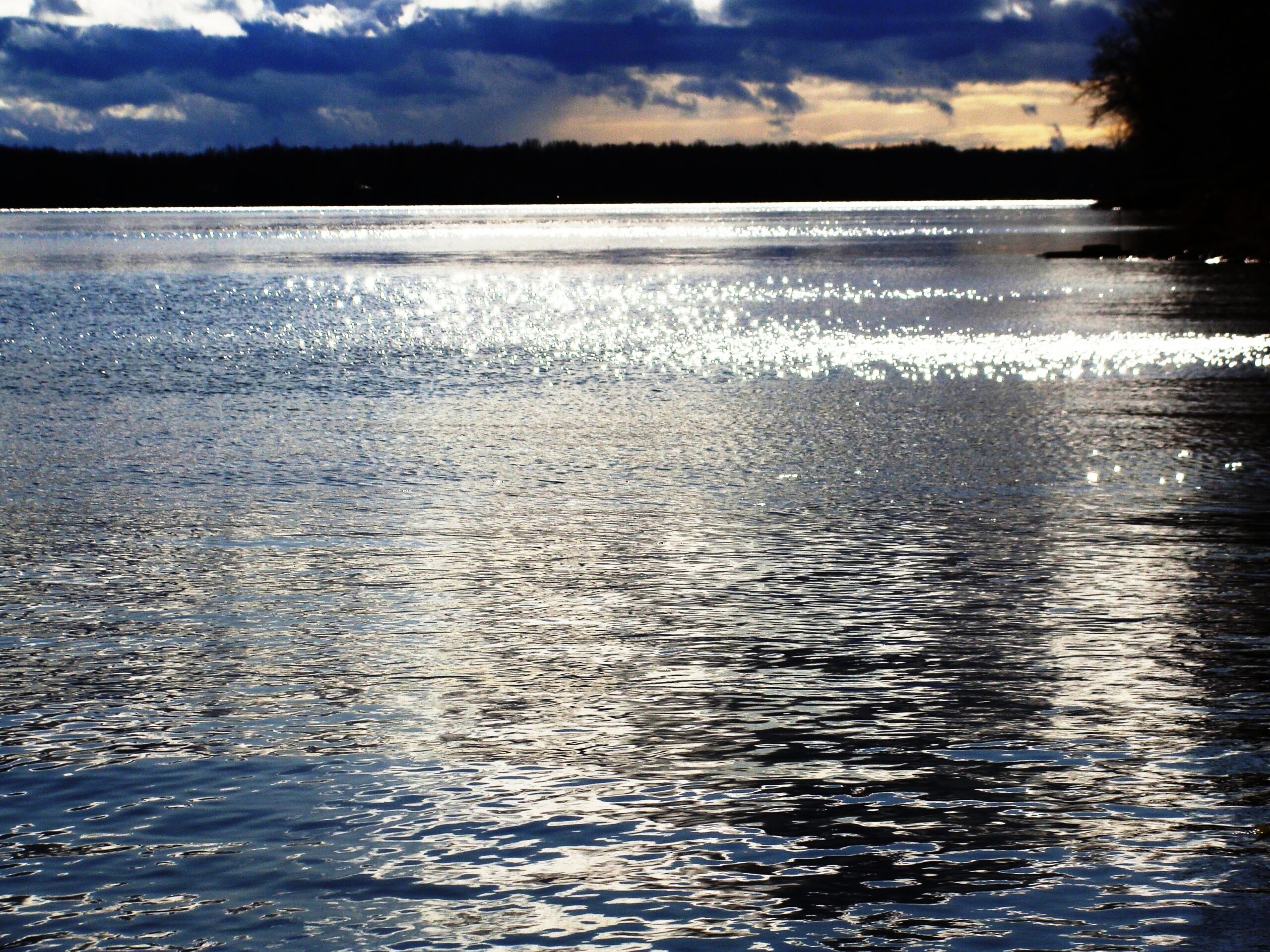 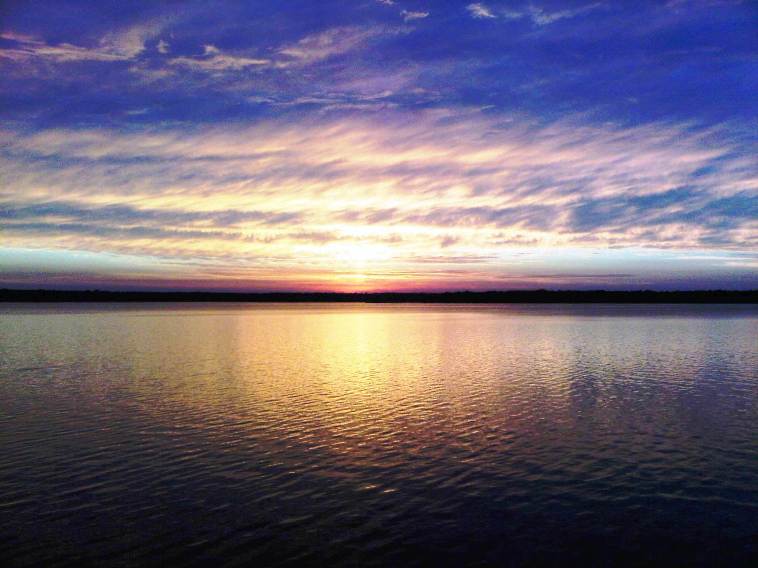 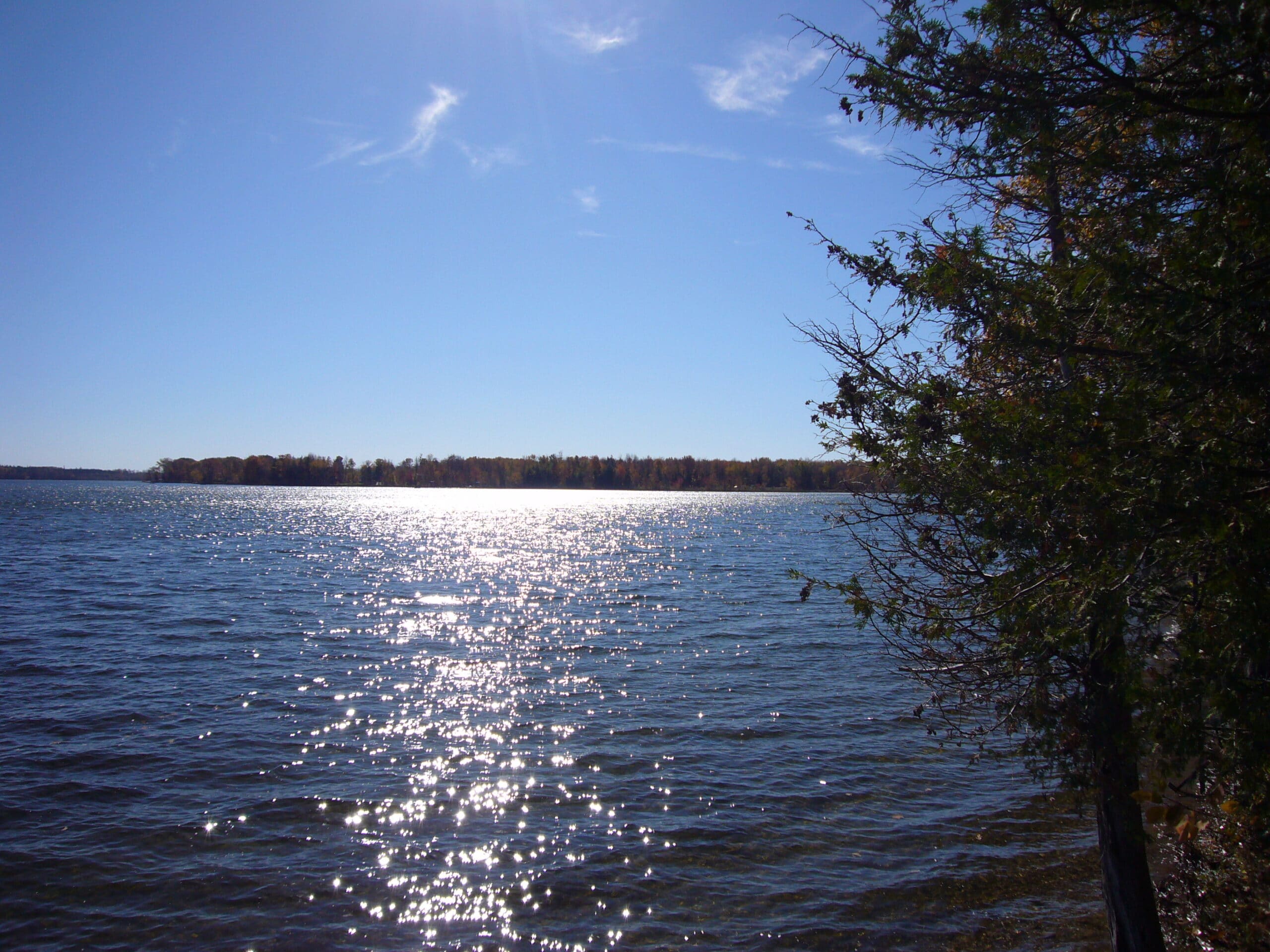 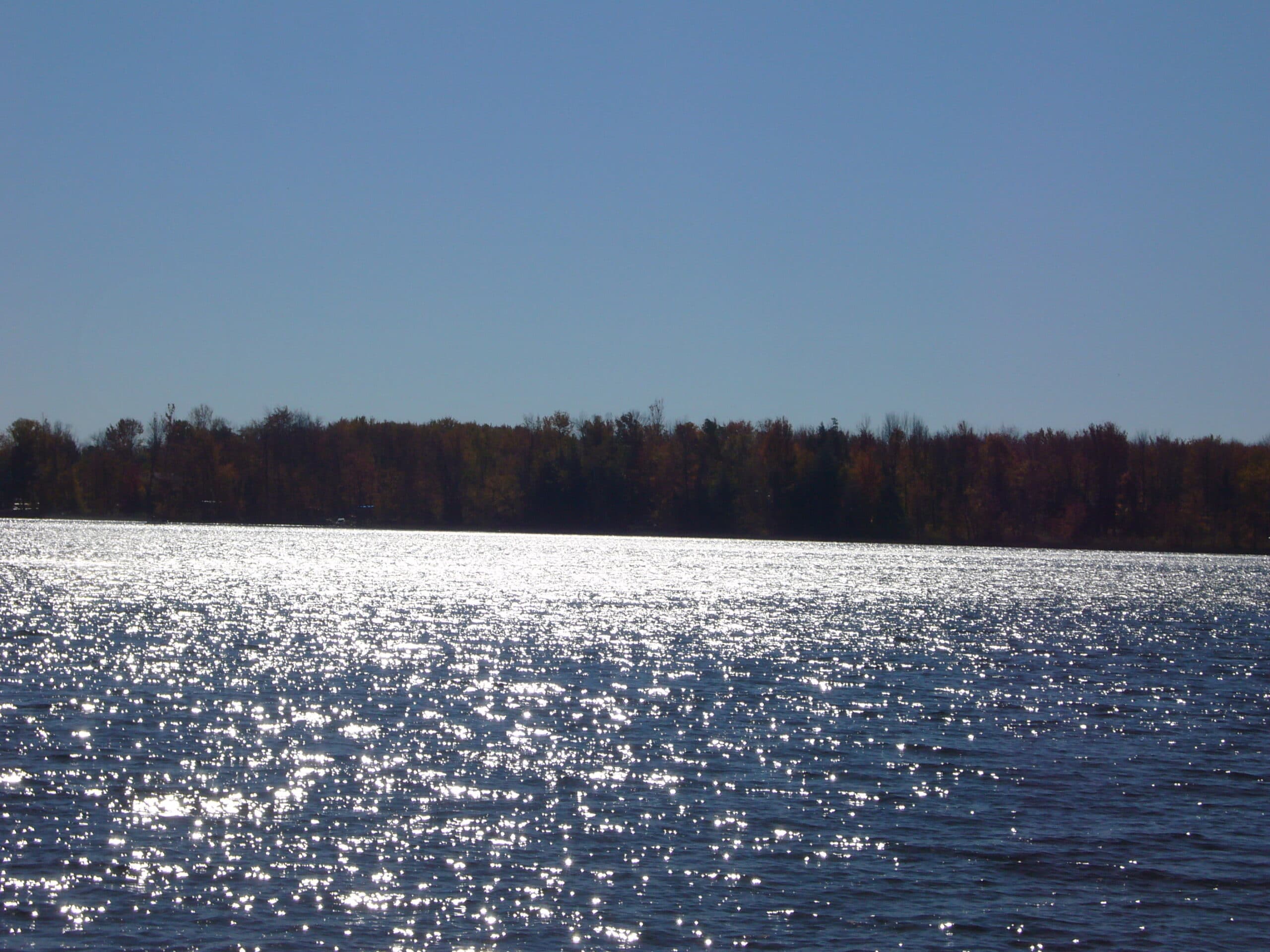 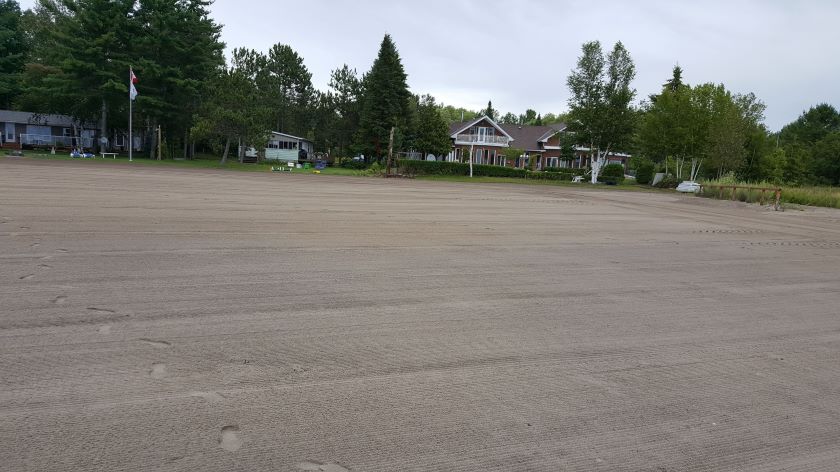 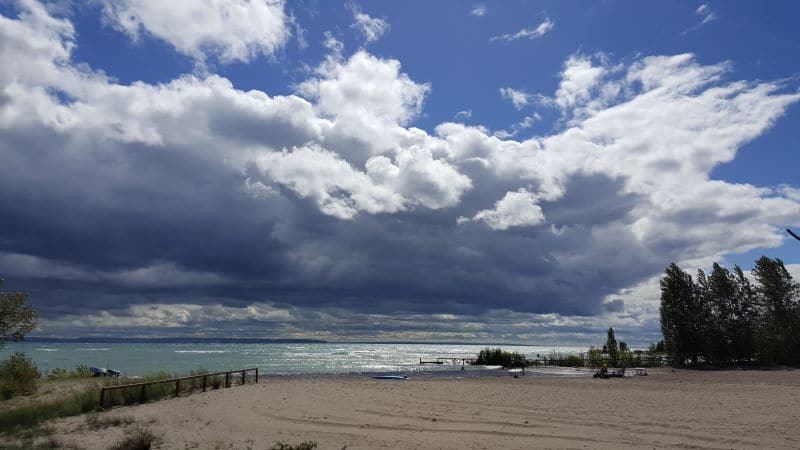 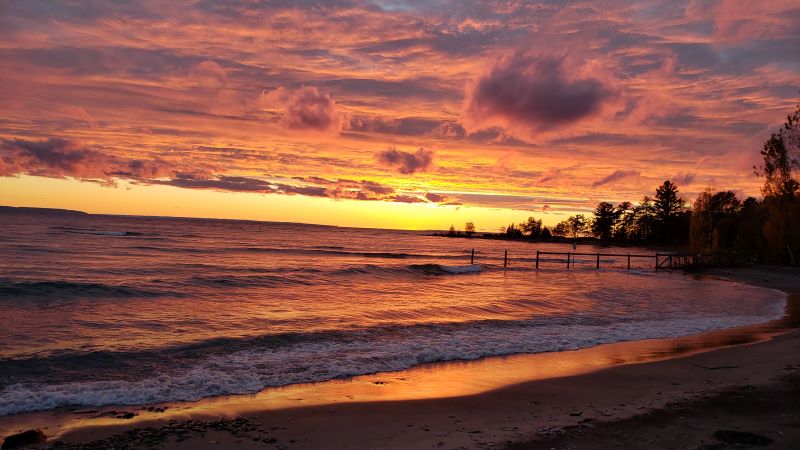 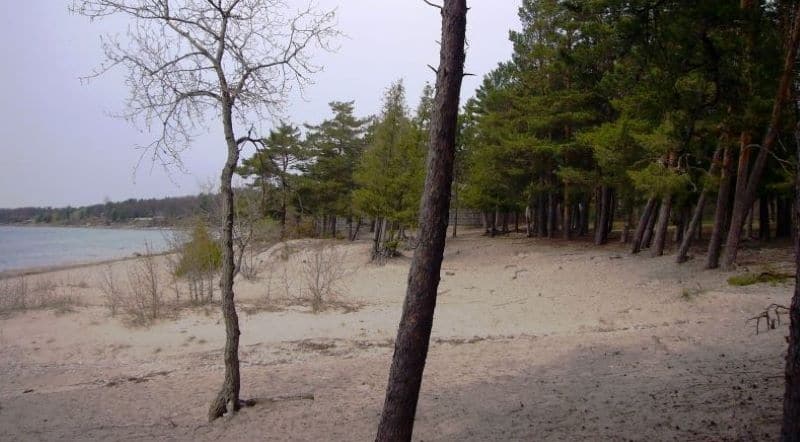